skip to main | skip to sidebar

Posted by Serious Jacob at 10:21 PM No comments:

Posted by Serious Jacob at 10:48 PM No comments:

The last music video of a trilogy by M83.  Watching the previous 2 videos will kind of make this one make more sense but even without it, it's a good one.
Posted by Serious Jacob at 9:06 PM No comments: 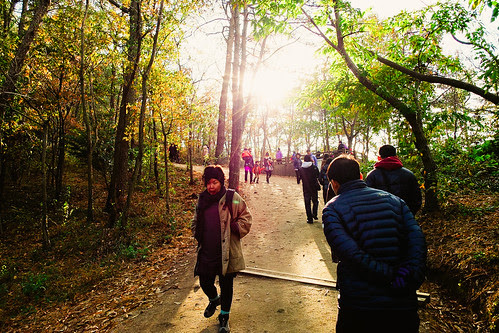 DSCF0052, a photo by djedamame on Flickr.
Posted by Serious Jacob at 9:05 PM No comments:

For some reason, the Hadong Office of Education has Wordpress blocked.  I can't read what it says but can tell what it means by the big red circle with a line through it.  The first time that that thing came up I was honestly kind of worried.  Like, "Shit, did someone just see that I tried to access and unknowingly blocked site?" or "Oh my gawd, is there some kind of super advanced surveillance software that is keeping track of every time I try to access a banned site?!"  But then I realized that it's really random as some major news sites like Huffington Post,Rolling Stone, Gawker and Kotaku are banned while Vice, Facebook, and Gizmodo aren't.

Anyways, nowadays I've been trying to preoccupy myself with Malaysia and Singapore things as Aurora, Ben, and I will be traveling there for 10 days at the end of January.  47 more days!  With the cold and school, it seems like forever.

I don't know how people can live somewhere where throughout the year the temperature ranges from freezing to 90 degrees in the shade.  Hawaii = high 70.  San Francisco = 50 somethings.  Here = 20 somethings - 90.  It's like there isn't enough time for me to get acclimated to the weather because as soon as I do it changes!  It's pretty crazy for me as this is my first real winter.  My average attire consists of a base layer of underwear and under shirt, then long tights and long sleeve shirt, then one pair of long socks covered by another pair of ankle socks, then a kind of thick button shirt, jeans or corduroy pants, a hoodie or sweater, scarf, and finally my pea coat.  Last thing I usually put on are gloves.  I just bought some ear muffs too.  Even with all that on, I'm still cold. Aurora and I kind of went overboard with the buying warm clothes but it's all a part of the experience.

Seeing the change from summer to now was pretty amazing too.  Entire forests just change color.  Everyone is wearing a puffy jacket.  Sometimes my windshield is frozen.  If I want the clothes to dry in less than a week, I have to use the heater.  The cold weather kind of makes me feel more normal.  In my head I think, "This is what most of people on the planet experience all the time!"

It's only the 2nd of December and most people have told me that it'll start getting warm again in March.  Then right away in April is when it gets hot again.  As much as I complain about it, I like it.  It's different.

One thing about the vacation that I'm always thinking about is how we'll deal with going from 80 degree weather in Kuala Lumpur, Malaysia to (OVERNIGHT) literally freezing 30 degree weather in Seoul.  I'm going to need an IV drip bag of Emergenc and Airborne.
Posted by Serious Jacob at 6:14 PM No comments: